Paris, 9th November 2021 – Ÿnsect, the world leader in natural insect protein and fertilizer production, has today announced the hiring of three new leadership positions. In January 2021, Ÿnsect entered the food market, followed by external growth in March with the acquisition of the Dutch Agtech company Protifarm. In less than a year, Ÿnsect has accelerated to become one of the global alternative agrifood leader. These key hires will help to lead Ÿnsect’s acceleration and growth in its global ambition to find alternative solutions to feed the world.

Shankar Krishnamoorthy has nearly four decades of proven track record as a global executive in the energy sector. Shankar led multiple business entities across the globe, rising to the position of a member of the Executive Committee of Engie SA, a global leader in the electricity and gas business. As the Head of Asian Business Development and CEO of Middle East and Africa, Shankar led the opening of new markets, leading  the development, construction, and operation of several multi-billion energy infrastructure projects for the international growth of Engie as well as portfolio management including the IPO of the company’s Thai assets. Since 2014, he has worked in London and Paris in several leadership roles at the corporate level including strategy, research, engineering, construction, risk management and venture capital.  He was also part of Engie’s Executive Committee from 2017 to 2021.

Tina Lawton is an international leader with more than 25 years of experience in life sciences and adjacent industries.  Tina brings extensive business experience having worked in and led businesses in both traditional, start-up and digital environments.  She was previously Global Head of Business Transformation at Syngenta a $15bn global producer of agrochemicals and seeds. In this role she was preparing the Group for an IPO. Prior to that she was Regional President, Asia Pacific and an EXCO member of the Syngenta Global Crop Protection Business. She has also held Global Business Unit, Sales, Marketing  and Business Development roles. In 2018, she was awarded the World Business Council for Sustainable Development Leading Woman Award for her contribution to achieving the UN Sustainable Development Goals, with particular focus on empowering women in Agriculture. She is British, and lives with her husband in Switzerland.

Ms Isabelle Toledano-Koutsouris is a senior executive with over twenty years’ international finance experience at top-tier investment banks. Isabelle has extensive expertise in international capital markets, most recently having ran the debt capital markets group, and later creating the private capital markets group at UBS in EMEA. During her time at UBS, Isabelle served as an executive board member and treasurer  for the Association for Financial Markets in Europe (AFME), and also as a board member of the UBS Global Visionaries, a program designed to support entrepreneurs and thought leaders whose businesses help achieve UN Sustainable Development Goals. A strong advocate of diversity, equity and inclusion (DE&I), Isabelle was a founding member of the UBS diversity council and continues to advocate for DE&I in all aspects business, particularly women in finance. Isabelle is a dual French and British citizen who lives in London with her husband and two children. She studied in France and the US, and speaks 3 languages.

“With these three new appointments, Ÿnsect continues in its ambition to accelerate the consumption of protein and plants across the globe. We are delighted to now include Shankar, Tina and Isabelle as critical parts of our executive leadership team, particularly as we continue to strengthen our international expansion efforts,” explains Antoine Hubert, President and CEO of Ÿnsect.

Two additional divisions are part of the new Executive Committee. Jean-Gabriel Levon, one of the co-founders of Ÿnsect, leads the Impact Department while Nicolas Desombre leads the Digital  Department. Both divisions are at the core of Ÿnsect’s business, driving goals and serving its mission to feed the planet with healthy, high-quality and sustainable products.

The new organization is formed under the supervision of Ÿnsect Board of Directors, chaired by Elisabeth Fleuriot. With 20+ years’ experience as President & CEO within global food companies across Europe, USA, Asia, including Danone, Yoplait, Kellogg’s, and Thai Union, Mrs Fleuriot has led companies in both developed and emerging markets, and is passionate about sustainability and multicultural team engagement. A non-executive board member of various global listed companies, such as Carlsberg, Stora Enso, and G4S, Mrs Fleuriot holds a BA in Economy, Finance and Marketing from the Institut d’Etudes Politiques de Paris and an MA in Economic Sciences from the Paris Assas University.

“2021 has been a great year, and we have moved forward faster than expected, especially with the acquisition of Protifarm in the Netherlands. Today Ÿnsect has three sites, including two in production, and has expectations to hire 500 new employees by 2023. With strong growth on the horizon, it was essential to strengthen our organization to better cope with our acceleration and growth.” says Antoine Hubert, President and CEO of Ÿnsect. 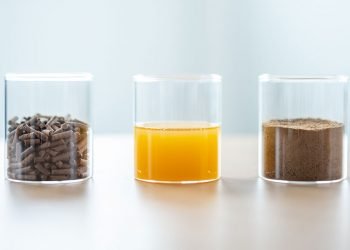